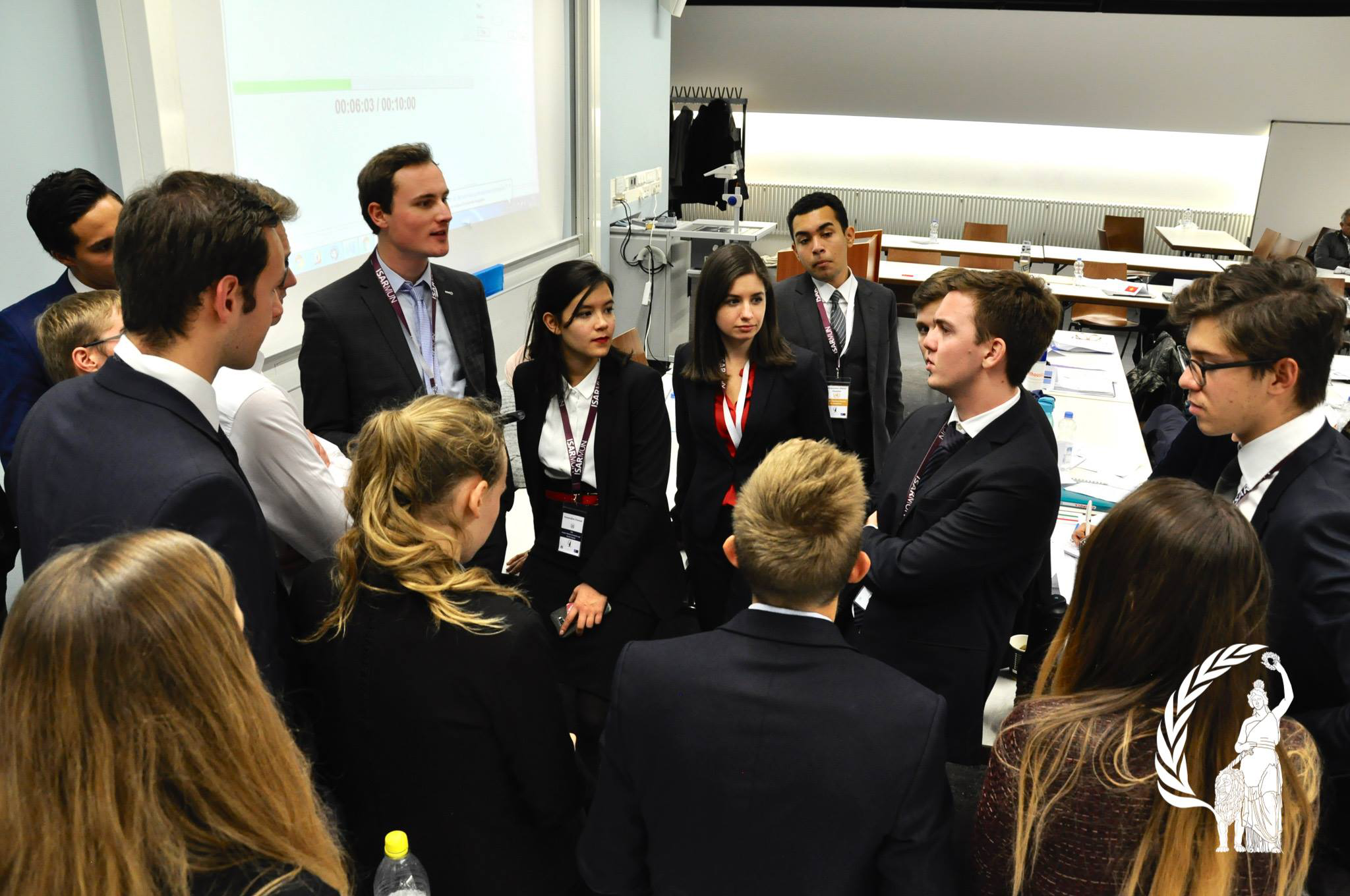 UN4MUN Rules of Procedure is a creation of the UN Department of Global Communications and the World Federation of United Nations Associations. It was developed to close the gap between the Roberts rules found in MUN and the real United Nations. This is a radical change from the parliamentary procedures that you can find in Roberts Rules, and brings benefits and challenges of its own.  It has been pioneered by Bill Yotive and WFUNA who have since focused on some of the developing countries of MUN such as Brazil, China, Russia, India and South Africa. This article will evaluate the advantages and disadvantages of UN4MUN, focussing on the style, it extenuates and the way committees ran in this style work.

UN Debating Style
As identified in the last article on Roberts Rules of Procedure, in the real United Nations, there are no such thing as Caucuses or motions. Instead, debating and lobbying is done through a speakers list created far ahead of time, with far more informal sessions, in the mode of an unmoderated caucus, than formal sessions. Ultimately, what is highlighted in UN4MUN rules of procedure is the need to cooperate rather than compete. In essence, the UN is not a parliament, and therefore does not need to adhere to parliamentary rules.

Start of Debate
In the real UN, abstaining is always in order in any part of a voting decision, as removing it can violate some of the principles of equal sovereignty. Therefore, when the roll call is declared, the only decision that can be made is being present. Present and voting, unlike in other MUN ROPs, is not necessary. Furthermore, in some UN4MUN rules, the chairs are not appointed before the conference, but instead elected among their peers during debate. This model is most used in WIMUN conferences run by WFUNA and have the added benefit of acting even more similarly to the real UN. In this case, Chairs truly serve the committee themselves, rather than the conference.
Setting the Agenda
In UN4MUN the overall agenda is already set before debating has started. Much like the real UN, the agenda of the meeting has been set months beforehand. Nevertheless, the integral agenda setting does take place in the first session of debate. This changes in some local forms of UN4MUN but often the first session is dedicated to creating an internal agenda, breaking down the overall agenda into specific topics that can be tackled in turn. Chairs in UN4MUN have a far more active role, moderating as a chair does in the real UN, meaning that keeping to agenda and steering debate is more prevalent. Therefore, the integral agenda might be written down and submitted to the chair before debating properly begins. This is not always the case, but the requirement to break down a topic before debating certainly is.

Formal and Informal Sessions
The main difference between UN4MUN and other ROPs can be found in the way debating sessions are handled. As mentioned, there are no caucuses, and instead only formal and informal sessions. The speakers list is the main part of formal debate, much like in the real UN, they are very important and are the primary way to declare intentions and form speeches. There are usually proper opening speeches in UN4MUN which also give delegates time to declare their intent on the  agenda.
The speakers list is also sometimes called “Formal Formal Consultations” (FF). As well as the “Formal Formal” consultations there are Formal – Informal Consultations (FI, rather similar to moderated caucuses) and Informal – Informal Consultations (II, Rather like unmoderated caucuses). Moving into these types of consultations is often described as “Caucusing”. Delegates may move into these other consultations by suspending the debate in a Formal Formal consultation. Doing this reflects the fact that when in real session, only speaker’s list speeches are entertained. Therefore, when you want to debate on a certain smaller topic (in an Formal-informal consultation) you need to suspend the meeting and move into these consultations. The same can be said for moving into informal informal consultations, which are akin to lobbying time in the UN. A majority of a delegates will be in these informal informal sessions as creating blocs and moving as one is of great importance in the UN and is similarly important in UN4MUN.
Points and Motions
In UN4MUN there aren't a wealth of points or motions to use. The two most basic are motions to suspend the meeting (to go into II or FI sessions) and point of order. Points of order here are used strictly to gain the attention of the chair to make a point either that the chair has not followed procedure correctly, or that the delegate requires clarification on debate and sessions. The versatility of using mostly these two makes for a far smoother experience of MUN than having lots of points or motions to remember. Again, this reflects the real UN experience where there are not many points or motions to use, but few that are meant to be used sparingly and with intent. There are still motions to Adjourn and close debate, but like in Roberts rules, these are not used often and don’t take part in the regular debating sessions. Other times, if there are specific points or motions to be made, chits or notes are used to raise the attention of the chairs.
Documentation
As in most UN meetings, decisions are adopted unilaterally, showing how consensus is how most the United Nations works. This encourages documentation to be drafted together within blocs, and merged before presented properly to the committee. Almost 80% of the General Assembly’s resolutions are passed by consensus and UN4MUN seeks to keep this balance.
Generally, anyone can submit a draft resolution without any specific level of support. However, simply put, if there is little support for that resolution, then there is little point in discussing it. Therefore, a natural barrier is made where draft resolutions should have some support before being officially tabled. Working papers are less of a formality, being created by blocs but not presented to the committee, instead presented during informal informal sessions for debating and lobbying amongst the committee. Amendments too are different, with amendments being produced in a less formal manner, either by notes or aurally, and objections being taken rather than formal voting procedures. This can be confusing and often some local rules introduce a more formal procedure for handling amendments like parliamentary debating does. Nevertheless, the attention is once again on consensus and tabling amendments to sink resolutions is less common, with amendments usually coming to placate blocs and groups in committee.
Decision Making or “Action Phase”
Once the caucusing is over, the decision making begins. As mentioned, consensus is common, and it is assumed that a draft resolution will be adopted by this method.  If there are objections, then voting is taken, but rarely does the committee adopt special measures for this voting procedure, and effort is taken to amend draft resolutions to produce consensus. A member state can still request separate votes on different parts of the draft resolution before adopting the whole text. This is similar to dividing the question and again is produced normally to remove controversial parts of a resolution to allow consensus to emerge on the whole text. Should there remain delegates unhappy with the text, there is sometimes time for formal formal speeches to understand why delegates are still opposed to the text. This is sometimes taken as a closing speech before the adoption of the resolution, but can also be held after the resolution is adopted.
Closing Debate
Once the action phase has ended, and there are no further suspension to the meeting, committee is fundamentally closed. There is little to add to here with motions to adjourn the meeting being called. In this way the focus is very much held on the resolution just adopted and the ending of committee is synonymous with the successful completion of the agenda.
Conclusion
UN4MUN takes a strong approach to the heart of UN values, consensus. Through this a lot of its rules are crafted to draw delegates into working together and creating a resolution that all agree on. It is true that without consensus, real process is seldom made, and many things can be learnt from this method. Then again, the informality and unstructured process can make the debating difficult for many delegates, and many of the power difficulties that result from louder delegates can be exacerbated by stronger delegates. UN4MUN is a lot harder to understand than Roberts Rules, and takes more training to grasp properly. However, once they are understood and mastered by all, they are a powerful tool to turn normal MUN debating into a force for consensus and debating as close to the UN standard as possible.