MUN - A matter of influence?

An essential skill MUN teaches you, without ever knowing 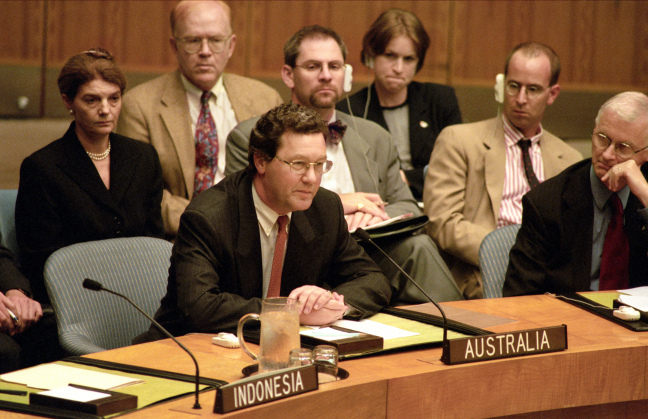 Alexander Downer, Minister of Foreign Affairs Speaking at the UN Security Council 15/09/99
Model United Nations prides itself as an educational tool to simulate and learn from the United Nations. Among the many skills it teaches, to me one stands out from the rest, one which is not as lauded as others but might be the most important, influence. Every step of a MUN conference relies on delegates managing influence to a lesser or greater degree to get their own ideas and interests across, whilst working towards the topic at large. In this sense, MUN reflects the very real interest-based lobbying that occurs in the real UN, but through it can also show the more progressive nature when well-constructed blocs overcome lethargic and domineering big powers. So let us explore, what is influence, how can we manage it, and why is it so important?
What is influence?
Influence is the ability to affect certain ideas onto people. It is a fundamental building block of diplomacy and can take many different forms. It can be best thought of as a natural phenomenon that occurs all around us, even if you do not notice it. Walking into a room confidently can influence people, losing your temper can do the same, it’s always there and there is nothing you can do to not influence people. In MUN, influence should mostly occur through productive and effective debate. Your facts and your understanding of the topic should help influence other delegates to a viable solution. However, pure facts are not the only way influence can occur though. We are not robots who judge a solution just on a string of words. The delivery of these words is paramount, as is their relevance in the topic at hand. Ultimately, you must not only have the right words to say, but the right timing and the right delivery too. This is what makes an influential speech and delegate.
How can we manage influence?
This is where we hit our first stumbling block. More often, it is those who deliver a speech overly impassioned, or overly fanciful, who seemingly influence the most.  To avoid this when listening to a speech, take a step back, understand where the speech is coming from, then judge its merit. Influence is a two-way street, and the influencer will be influenced just as much by people’s reaction.If you let yourself be influenced, you will be. This is no bad thing, it is important to listen and far too many people in MUN and beyond don’t admit “I don’t know” when they should.
Why is it important?
Influence guides every decision in the modern world. If it didn’t, advertising wouldn’t be nearly the massive industry it is. On the global stage, influence is what states buy and sell. The embassies of diplomats and swathes of meetings across the world more than just a front, they are a way to subtly influence the one countries message onto another. In the past, influence was a matter of weaponry, and unfortunately, the person with the bigger gun still sometime wins. However, in our modern diplomacy, influence plays the key role of mediating conflict, and building peace.Influence in MUN is presented in a way it would not in the real United Nations. In MUN each person’s vote is truly equal, and influence can go many ways depending on the delegates. In the real United Nations, abstentions are sometimes based on whether a member state can afford to send a delegate to the building, looking at Palau here. Therefore, in MUN you can play and learn with influence in a controlled environment where it is king.
Conclusion
What this article is trying to say is that influence is the backdrop to MUN and it is important to both recognise that, and work with that. This is hardly to say that other skills aren’t important, but mastery of them is nothing without understanding what you are doing with those skills. Influence is not just limited to diplomacy either. In all of our day-to-day lives there will be times where we seek to influence, or be influenced by ideas. It is in our best interests to manage this influence, especially in a world where we are bombarded by information every second. Learning to take a step back, to think of the channels of influence in a conversation, a committee, a conference, is essential part of every delegate’s life.