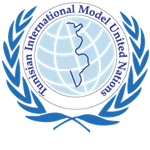 Yet in this case, while Morocco and Tunisia were protectorates, South Africa considers Algeria as an integral part of France as it has been for over a century. Moreover, the inhabitants of Algeria are French citizens. As a result, S...