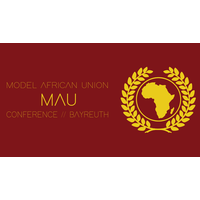 An Empowering Africa in a Globalized World

The third Model African Union Bayreuth Conference (BAYMAU18) from 18-22 May opens its doors at the University of Bayreuth and will host around 130 delegates from all over the world. The motto of this year’s BAYMAU18 Conference is „Empowerment. The Potential of an Empowering Africa in a globalized world“ and will lead among other things to versatile discussions around the empowerment of marginalized, vulnerable social groups in Africa.

Before the conference, with its sessions in 5 different committees, there will be a rich framework program with cultural activities and different workshops.

Could we raise your interest? Then we hope to see you soon in Bayreuth! Committee of African Heads of State and Government on Climate Change