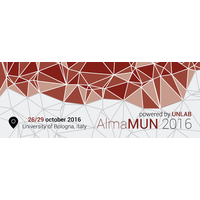 The interconnected, fast-paced nature of an increasingly globalized world has played a significant role in changing both social dynamics and the way we think of - and tackle - global challenges and issues of international relevance.

As traditional power structures and communication patterns are no longer always applicable, the increasing role of non-traditional stakeholders in the public debate must be accounted for, understood and encouraged. In particular, without precedents in history, in the last decades the role of young people as key partner to spreading awareness and drivers of change has become more and more relevant in the development of strategies for a sustainable future.

AlmaMUN 2016 powered by UNLAB, brought to you with the contribution and patronage of the University of Bologna, will revolve around setting guidelines and redefining boundaries of youth action across different fields and committees: policies and decisions will therefore be tailored to the challenges faced by the different international bodies simulated.

Delegates and chairs will be confronted with the demanding task of not only addressing pressing issues at stake in their areas of expertise, but also reshaping traditional parameters for youth action.